↓
Home→Announcements→Almond Pollination – How Does That Work? 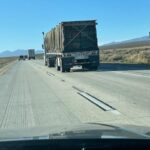 January is the time of year when beehives from all across the US are sent to be used in almond groves in California. A trailer load as shown on the left will carry approximately 400 hives loaded on pallets of 4 each. 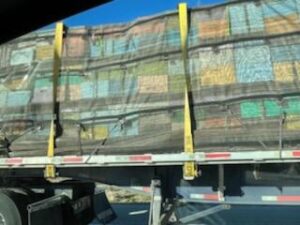 It is estimated that 1.5 million beehives will be required to pollinate all the acres of almond trees in groves from Bakersfield stretching north 400 miles through the central valley. This truck was seen headed west on Interstate 40 on January 20th.

Once these loads have arrived in the State, they will again be inspected and evaluated by local beekeepers as they are unloaded from their trailers. The pallets will then be distributed across the groves to do their work. 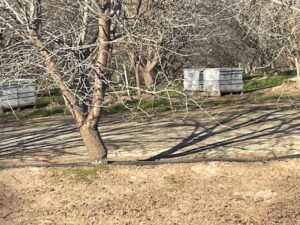 Approximately 1-2 hives per acre are required for adequate pollination of the trees. The use of honeybees in this way is critical since almond trees are not easily wind-pollinated. Native pollinators help with the process, but there are not nearly enough of them to start to do the job. About 20% of the grower’s cost to produce a crop is dedicated to the rental of pollinator hives.

The trees seen to the right have not yet begun to flower, but they will start in early to mid-February. Pollination will be complete by mid-March. At that time, the hives, now heavy with almond honey, will be collected and loaded back onto trailers for their return journey home. 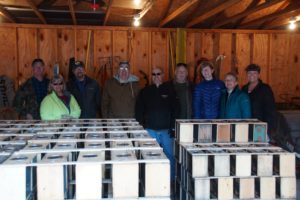 Some of the hives that were originally supplied by commercial operators in California will be returned to their home apiaries in the northern part of the state. There, after the bees are allowed to rest for a bit, they will be used to make packages for sale. In this process, two or three pounds of bees (7000 to 10,000 workers) will be poured into wooden boxes with screened sides. A caged queen will be added to the package, along with a can full of sugar water to feed them as they start their next journey. These packages will be bundled, palletized and again loaded on to trailers to be delivered and distributed to hobbyists, sideliners, and commercial keepers all across the United States.